Thirty years on from one of Britain’s worst train crashes, a rail safety expert warns the lessons... 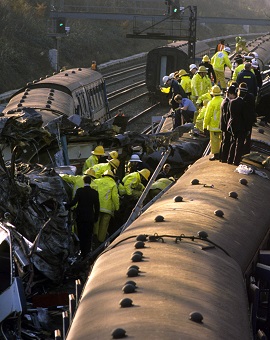 The crash at Clapham Junction in London, which killed 35 and injured hundreds, led to a drive for safety improvements on Britain’s rail network.

But for the Institution of Occupational Safety and Health (IOSH) Railway Group, several incidents and near-misses in recent years have sparked concern.

They are particularly troubled by high levels of fatigue among maintenance workers, who are doing long hours to ensure the network runs as smoothly as possible.

Group Chair David Porter said: “People are working incredibly hard over a long period to make sure the railways keep moving, but at what cost? Fatigue is a major issue in our industry. It is being caused by people working long hours and with fatigue comes mistakes which lead to safety risks.

“In recent years we have had train derailments and potential derailments and instances of track workers just avoiding speeding trains. Lives are at stake here. We have to make safety our absolute priority.”

Mr Porter’s stark warning comes on the eve of the 30th anniversary of the Clapham crash, which happened in the morning rush hour on 12 December 1988.

A crowded train stopped as its next signal changed unexpectedly to red. It was struck from behind by another train which had passed a through a green signal that should have been red. The collision jolted the stationary train off its rails and into the path of a third train.

This led to recommendations such as restricting the number of hours worked by these staff as well as tighter procedures for testing and commissioning signalling systems.

Mr Porter added: “Were the lessons learned from Clapham? I’d say they were. Have they been forgotten? Unfortunately, maybe they have.

“For a long time, people in the rail industry worked with what happened at Clapham firmly implanted in their minds. They knew how important it was that they got things right from a safety point of view because they remembered what happened on that fateful day.

“Many of these people are no longer in the industry and there is a real sense that people aren’t as aware as they should be. Standards have lapsed, and we can’t afford for this to happen.

“We have seen a number of incidents and near-misses which suggest this is the case. We must redouble our efforts to ensure our railways are safe for passengers and workers.”

Mr Porter’s comments are supported by a report, published last month, into a train derailment just outside London Waterloo station in August 2017. The report by the Rail Accident Investigation Branch the human errors which contributed to the incident had echoes of Clapham.

In a separate ‘near-miss’ incident in August this year, track workers just got out of the way of a speeding train in time at Egmanton, Nottinghamshire.